Definition, The Role Of Biological Factors, Relationship To Rearing Practices, Influence Of Television And Other MediaAnger Management Programs, Influences of Socialization 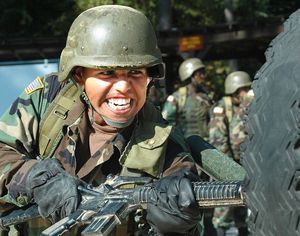 Aggression in humans remains a substantial social problem. A number of theories have been constructed to explain aggression, and much research has focused on factors that affect aggressive behavior.

In the ethological approach, aggression is viewed as an instinctual system built into the organism independently of external stimuli. This aggression must be released through an appropriate releasing stimulus. The most influential instinctual theory is the concept of thanatos proposed by Austrian neurologist Sigmund Freud (1856-1939). He theorized that two instinctual drives, eros (love instinct) and thanatos (death instinct), motivate human behavior. Thanatos manifests itself as aggressive behavior in daily living.

The other main theory comes from social learning and focuses on environmental influences. Albert Bandura focused on modeling processes that shape aggressive behavior and direct feedback in the form of reward and punishment. From social cognitive theorists comes the assumption that the social interpretation about which interpersonal behaviors constitute aggressive provocational retaliation is crucial for determining whether children will behave aggressively or not.

In 1997 Albert Ellis and Raymond Chip Tafrate presented an approach to the problem of dealing with anger called rational emotive behavior therapy (REBT). This approach was designed to help people deal effectively with emotional problems and to systematically understand the roots and nature of anger. REBT deals with the problem of anger realistically. The core of REBT is unconditional acceptance of self and then continually maintaining this feeling of self-acceptance.

Although growing up in a violent community is associated with aggressive behavior, the degree to which this can be considered seriously pathological has been called into question by the results of some research.

Betsch, T., and D. Dickenberger. "Why Do Aggressive Movies Make People Aggressive? An Attempt to Explain Short-Term Effects of the Depiction of Violence on the Observer." Aggressive Behavior 19 (1993):137-149.

Ellis, Albert, and Raymond Chip Tafrate. How to Control Your Anger Before It Controls You. Toronto: Carol Publishing, 1997.