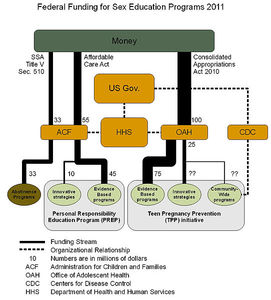 Sex education usually refers to programs offered in schools, typically from grades five through twelve, that cover sexuality and reproduction. Sexuality refers to the quality or state of being sexual and includes all thoughts and behaviors that have to do with an individual as a sexual being. For example, bodily changes at puberty, decisions to engage in kissing, petting, or having sexual intercourse, and using or not using contraceptives can be included under the broad term "sexuality." Sex education programs are also called family life education, sexuality education, and reproductive health education. Sometimes sex education is offered in the form of human immunodeficiency virus (HIV) education. In 1999 more than 93 percent of all public high schools in the United States offered courses on sexuality or HIV. Sex education is not a required subject in all school districts, and programs can vary from an entire course on human sexuality to integration of information in biology, health education, physical education, and consumer and family science (home economics) classes. Many programs allow parents to choose whether or not they want their son or daughter to participate.

Originally, sex education was started in schools to teach students about physical and sexual maturation. Over the years the goals became decreasing the incidence of teen pregnancy, delaying the onset of sexual activity among teens, and decreasing the rates of sexually transmitted diseases (STDs) and HIV cases. Studies conducted from the 1980s to the early twenty-first century indicated that few sex education The nature of sex education can vary widely from one school district to another. Programs can range from abstinence-based models to more controversial approaches, such as this 1991 high school condom "give away." programs achieved these goals. Increase in reproductive knowledge did not necessarily lead to responsible decision making about sexual choices. Improving access to contraceptives did not decrease teen pregnancy or increase use of contraceptives. But there have been many things learned from both successful and unsuccessful programs as is discussed below.

Ninety-three percent of Americans support teaching sexuality education to high school students and 84 percent support sexuality education to middle/junior high school students. In spite of this support, sex education in schools is a controversial issue on federal, state, and local levels. The controversy surrounding abstinence-only versus abstinence-based programs centers around the belief that teaching students how to use birth-control methods will only encourage them to be sexually active. Politics plays a part in which policies are adopted in school districts. The federal government increased funding for abstinence-only programs in the later 1990s. This, along with increased funding for HIV and AIDS prevention programs and for teen pregnancy prevention programs, has contributed to state and local trends toward encouraging abstinence-only programs. Additionally the conservatism of the administration of George W. Bush, along with the strength of religious conservatives in some areas of the country, has contributed to the growing number of abstinence-only programs in schools.

Research has thus far failed to support the claim that knowledge of birth-control methods actually increases sexual activity. There was a decrease in teenage sexual activity and adolescent pregnancy rates from 1991 to 1997. Sexual activity rose again, however, from 1997 to 1999. Abstinence accounts for about one-quarter of the decline in pregnancy, while three-quarters is due to better use of contraceptives, especially long-term methods. In a 1999 survey, the Centers for Disease Control and Prevention found that 65 percent of students have sexual intercourse before the end of high school. Adolescents are having sex at a younger age and are engaging in high-risk behaviors such as having multiple sex partners.

Topics included in sex education vary from program to program. Typically puberty is discussed, especially in the early adolescent years. Many programs also cover physiology, STDs, HIV/AIDS, pregnancy, and parenthood. Less frequently covered topics include pregnancy prevention information (except for abstinence), sources of family planning services, the most likely time for pregnancy to occur, abortion, and sexual orientation. These latter subjects are the basis for community-based controversy about sex education. As mentioned earlier, some people believe giving certain information teenagers will encourage their sexual activity, cause an increase in the abortion rate, or bring about more homosexuality.

Programs with these components can be effective with high-risk youth, that is, students who are most likely to use drugs and alcohol, be sexually active, and/or drop out of school.

It has also been found that the goals of reducing the rates of pregnancy and childbearing can also be reached by youth programs that address issues of poverty, unemployment, and school performance. Examples of these include the Youth Incentive Entitlement Employment Program, the Teen Outreach Program, and the American Youth and Conservation Corps. The reasons for the positive impact of these programs are not fully known, but the programs do address factors that put adolescents at high risk for being sexually active such as poverty, lack of future orientation, problems at schools, social disorganization, and lack of feeling connected.

The future of sex education programs in the twenty-first century will depend on the national political climate and local community reactions. Although 86 percent of registered voters in a national survey agreed that sex education should be taught in the public schools, the political environment will certainly influence the future direction of sex education.

"Trend toward Abstinence-Only Sex Ed Means Many U.S. Teenagers Are Not Getting Vital Messages about Contraception." In the Alan Guttmacher Institute [web site]. New York, 2000. Available from http://www.agi-usa.org/pubs/archives/newsrelease3205.html; INTERNET.