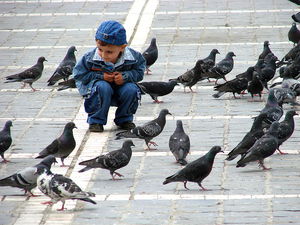 In sensorimotor play, children engage in motor movements beginning with early reflexes and moving toward more intentional actions. These early actions are initially the result of trial and error; children learn through their actions that their behavior has an effect on the environment. As children develop, their actions become more sophisticated and as a result more deliberate. For example, sensorimotor play includes the reflexive behavior of an infant grasping a rattle placed in her hand, as well as the intentional behavior of an older infant picking up and shaking a rattle to make sound. The sensorimotor stage typically occurs from infancy through age two.

Pretend play usually begins around eighteen months of age. Children at the pretend play level are able to act out adult roles, actions, and events that are familiar to them. At about the age of three or four, pretend play skills become more symbolic. This means that children are able to substitute one object for another. The younger child "feeds" a baby doll with a toy bottle, whereas the older child is able to "feed" the baby with a wooden block, pretending that the block is the baby bottle. It is during this level of play that the child's own experiences directly influence and provide a foundation for their play.

It is at about the age of three to four that children develop an interest in constructive play. Children at the constructive level manipulate objects and materials in their world resulting in an end product, such as a chalk picture, a block tower, or a sand mountain. Here children draw designs on a piece of paper, build with blocks, play and dig in the sand, and so forth. As children become skilled in manipulating objects and materials in their environment, they also become more skilled in expressing thoughts, ideas, and concepts.

The child at the mastery play level is able to demonstrate skilled motor movements and engage in forms of imaginative or pretend play simultaneously. Children at this level move about their environment with ease, confident in their actions. A child at the mastery level would be able to run and jump over obstacles on a playground while pretending to be a cartoon superhero. Mastery play typically emerges around four to five years of age and continues to develop as the child encounters new play experiences and challenges.

By the age of five, children become interested in formal games that have rules and, at times, have two or more sides. Games with rules play is predominant during the middle childhood years, a time during which children's thinking becomes more logical. It is at this level of play that children begin to realize that activities such as Red Rover, Simon Says, and card games will not work unless everyone follows the same set of rules. This level of cognitive play is much more organized than the earlier levels described and may involve competition and defining criteria that establishes a "winner."

Play is important to all aspects of a child's development. Children learn ideas and concepts and enhance language, social, and motor skills through play. As Piaget so simply stated it: Play is a child's work.

The Nemours Foundation. "The Power of Play: How Play Helps Your Child's Development." In the Kids Health for Parents [web site]. 1999. Available from http://www.kidshealth.org/parent/emotions/behavior/power_play.html; INTERNET.