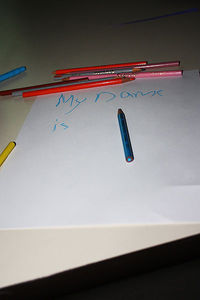 Learning can occur in a variety of manners. An organism can learn associations between events in their environment (classical or respondent conditioning), learn based upon the reinforcements or punishments that follow their behaviors (operant or instrumental conditioning), and can also learn through observation of those around them (observational learning). Learning principles are of particular importance for school performance.

Behavioral theorists believe that certain psychological disorders are a result of a form of classical conditioning. Watson's experiment on Little Albert suggests that phobias might be learned through pairing a neutral or harmless stimulus with an unconditionally frightening event, thus causing the person to associate fear with the harmless stimulus. Treatment for phobias involves extinguishing the association between fear and the neutral stimulus through so-called systematic desensitization and flooding.

In systematic desensitization, patients are slowly presented with the feared object in stages, beginning with the least-feared situation and ending with a situation that provokes the most fear. The therapist teaches the patient to remain relaxed as the feared object approaches so eventually the patient associates it not with fear but with calmness and relaxation. One example is the case of Little Albert, in which Watson attempted to extinguish the baby's fear of the white rat by giving him food (a stimulus that elicited pleasure) while showing the white rat. In this case, the white rat ceases to be paired with a fear-inducing stimulus and instead becomes linked to a pleasure-inducing stimulus.

In flooding, the therapist attempts to alter the pair that has been classically conditioned. In this case, however, the patient agrees to be surrounded by the fear-inducing stimulus and not attempt to escape the situation. Flooding functions like extinction because the stimulus is present without the aversive response, so association weakens between the neutral stimulus and the fear response. After a long period, the patient ceases to be afraid of the stimulus.

Thus, classical or respondent conditioning is a purely behavioral type of learning. Animals or people conditioned in this manner do not consciously learn the associations between the stimuli and the responses. Instead, because the pairings occur repeatedly, the conditioned stimulus elicits the conditioned response unconsciously. In some instances, however, these responses are not automatic; instead, certain outcomes will induce the animals or humans to repeat the behavior while other outcomes cause them not to repeat the behavior.

The Effect of Reward or Punishment on Behavior

American psychologist Edward Thorndike's Law of Effect states that depending on the outcome, some responses get weakened while other responses get strengthened, and this process eventually leads to learning. Thorndike noted that when an animal was rewarded for a certain behavior, that behavior became progressively more frequent while behaviors that did not elicit a reward weakened and became sporadic, finally disappearing altogether. In other words, unlike classical conditioning, what follows a behavior or response is what is primarily important.

In his mid-twentieth-century experiments with rats and pigeons, American psychologist B. F. Skinner found that animals use their behaviors to shape their environment, acting on the environment in order to bring about a reward or to avoid a punishment. Skinner called this type of learning operant or instrumental conditioning. A reward or reinforcement is an outcome that increases the likelihood that an animal will repeat the behavior. There are two types of reinforcement: positive and negative. Positive reinforcement is something given that increases the chance that the animal or person will repeat the behavior; for example, smiling or praise whenever a student raises her hand is a form of positive reinforcement if it results in increased hand-raising. Negative reinforcement occurs when something is taken away; stopping an electric shock to elicit a behavior from a rat is an example, because whatever behavior the rat exhibited to terminate the shock will increase.

A punishment, on the other hand, is an outcome for which the likelihood of a future behavior decreases. For example, spanking or slapping a child is an example of punishment, as is grounding, because all three can be expected to reduce the occurrence of the behavior that preceded them.

There are a number of ways in which someone can manipulate an animal's or a person's behavior using operant or instrumental conditioning. One of these methods is called shaping and involves reinforcing behaviors as they approach the desired goal. Suppose a person wants to train a dog to jump through a hoop. He would first reward the dog for turning toward the hoop, then perhaps for approaching the hoop. Eventually he might reward the dog only for walking through the hoop if it is low to the ground. Finally, he would raise the hoop off the ground and reward the dog only for jumping through the hoop.

The Role of Context

Context is extremely important for operant conditioning to occur. Both animals and people must learn that certain behaviors are appropriate in some contexts but not in others. For instance, a young child might learn that it is acceptable to scribble with a crayon on paper but not on the wall. Similarly, Skinner found that animals can discriminate between different stimuli in order to receive a reward. A pigeon can discriminate between two different colored lights and thereby learn that if it pecks a lever when a green light is on it will receive food, but if it pecks when the red light is on it will not receive food.

What is more, animals can discriminate between different behaviors elicited by different contexts. For example, a rat can learn that turning around clockwise in its cage will result in getting food but that in a different cage turning counterclockwise will bring a reward. Animals will also generalize to other stimuli, performing the desired behavior when a slightly different stimulus occurs. For instance, a pigeon that knows that pecking a lever when a green light is on will bring food might also peck the lever when a different-colored light is on. Both generalization and discrimination help animals and people learn which behaviors are appropriate in which contexts.

The rate of reinforcement can also affect the frequency of the desired response. Delaying reinforcement slows learning down, although research shows that humans can learn from delayed reinforcements, and that it is often difficult to forfeit immediately positive outcomes in order to avoid adverse ones later.

The schedule that elicits the most rapid frequency of responses is the fixed ratio schedule. In this case, the animal knows it will receive a reward after a fixed number of responses so it produces that number as quickly and frequently as possible. This phenomenon also occurs with people; if craftspeople are paid for each object they make, they will try to produce as many objects as possible in order to maximize their rewards.

Interval schedules tend to produce slower frequencies of response. A fixed interval schedule will produce fewer responses early in the interval with an increase as the time for the reward approaches. One example in human behavior is the passing of bills in Congress. As elections approach, the number of bills passed increases dramatically, with a swift decline after the election. A variable interval schedule, on the other hand, produces a slow but steady frequency of response; for instance, a teacher giving "pop" quizzes at irregular intervals encourages her students to maintain a consistent level of studying throughout the semester.

Although classical or respondent conditioning involves automatic responses to behavior, operant or instrumental conditioning is a result of the decision to produce a certain behavior in order to receive a reward or avoid a punishment.

Learning does not always occur directly as a result of punishment or reinforcement, but can occur through the process of watching others. Children can learn from observing rewards or punishments given to someone else, and do not need to be the recipients themselves. This form of social learning is called observational learning. The terms "imitation" and "modeling" are often used interchangeably and are types of observational learning.

Imitation may be a powerful means through which infants can learn from those around them. Andrew Meltzoff and M. Keith Moore's classic 1977 study illustrated imitation of tongue protrusion, lip protrusion, and mouth opening by two- to three- week-old infants. For this behavior to occur, infants must match what they see the model doing with what they feel themselves doing, and it has been demonstrated in infants three days old. Thus, it seems that imitation occurs from birth onward and that infants may learn many new behaviors in this way.

Observational learning can have other effects as well. The opposite of the Bobo findings can occur in which inhibition of a class of behaviors becomes less likely after observation. Often inhibition occurs after observing another person being punished for performing a certain type of behavior, such as aggressive behavior in general.

Bandura's cognitive theory of observational learning is helpful for understanding why children Developmental toys and games such as "Memory" are invaluable to a child's learning process. imitate behavior in some cases and not others. In particular, children are more likely to imitate a model when they see the model's behavior rewarded rather than punished. In addition, self-efficacy beliefs play into a child's choice of imitation. If the child believes that she does not have the talent necessary to imitate a particular behavior, she will not attempt to do so. Thus it seems that both cognitive and social factors come into play in observational learning, and that is why Bandura's theory is also called a social cognitive theory of learning.

Observational learning is also important in the learning of sex roles. It has been found that children can learn appropriate behaviors for each sex by reading, watching television, or observing real models.