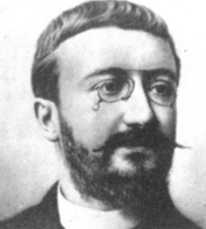 Alfred Binet's most significant contribution to the field of child psychology was the development of the first intelligence test.

Binet was born in Nice, France, in 1857. He received a law degree in 1878 but became interested in the field of psychology in 1880. Binet did not receive any formal graduate training in psychology. His first appointment was in a French laboratory, the Salêptriére, conducting research on hypnosis under the supervision of Jean Charcot. In 1890 Binet rejected Charcot's theories and began research on cognition at the Sorbonne's Laboratory of Physiological Psychology. In 1894 Binet became the director of the laboratory, where he worked until his death in 1911.

The unifying theme of Binet's research was the examination of individual differences and similarities in cognition. Binet studied a range of populations, including children, mental hospital patients, and professional artists. His research topics were also wide-ranging, including studies of consciousness, sensation, creativity, language development, memory development, and mental fatigue.

Binet's most influential contributions to the field of psychology were in the area of intelligence testing. In contrast to his contemporaries who supported the measurement of physical features or a single factor as an assessment of intelligence, Binet supported a functional, multidimensional view of intelligence that emphasized reasoning and comprehension. Because of his unique approach to studying intelligence, the Paris school system asked Binet to develop a test that could be used to identify children who would benefit from special education classes. In 1905 Binet and his collaborator, Theophile Simon, responded to this request by creating the first intelligence test, the Binet-Simon Scale. Binet revised the scale in 1908 and again in 1911.

The first intelligence test was developed by Alfred Binet in 1905.

A second focus of Binet's research was the cognitive development of his two daughters, Alice and Madeleine. His extensive observations and experimental studies of his daughters allowed him to develop several theories about cognitive development. Binet believed that the purpose of cognitive development is to allow children to adapt to the physical and social demands of their environment, emphasizing the fact that children learn by assimilating new experiences into their existing ways of thinking.

An important milestone in Binet's career was the creation of the first laboratory based in a European school for young children, the Laboratory of Experimental Pedagogy. The purpose of this laboratory was to develop a systematic line of experimental research with children and to provide training for teachers on how to educate mentally retarded children. The establishment of this laboratory was a major event in the formation of the field of child psychology.

In addition to Binet's considerable direct contributions to the field of psychology, his work has also influenced the research of subsequent generations of child psychologists.

Binet, Alfred, and Theophile Simon. A Method of Measuring the Development of the Intelligence of Young Children, 3rd edition. Chicago: Chicago Medical Book, 1915.