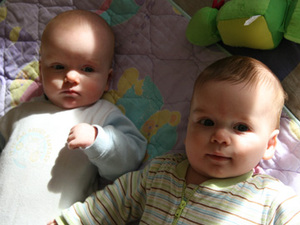 Throughout history, across all cultures, people have been fascinated with twins. In addition to interest in the close emotional ties and biological similarities that twins may share, reports of special twin languages and twin extrasensory perception (ESP) help people to explore ideas of what it means to be human. Twin language is a form of creole that some twins develop and most outgrow at an early age. Mostly anecdotal evidence of twin ESP typically focuses on one twin feeling phantom pain when her co-twin is injured. Beyond this intrinsic interest, twins are very useful for science. Identical twins share the same genetic code and thus are natural clones. How similar or different are they to each other? How important are genes and environment for development? Because identical twins share all of their genes, it is the environment—rather than genetics—that accounts for any differences between them. In a study design that includes both identical and fraternal twins, a researcher can estimate the relative influence of genes and environments on behavioral differences among people.

Identical, or monozygotic, twinning occurs when one egg is fertilized by one sperm then splits after conception into two genetically identical halves. These twins share all of their genes and are the same sex. Fraternal, or dizygotic, twinning occurs when two eggs are released by the mother and fertilized by two separate sperm. Fraternal twins share on average half of their genes, just like typical siblings. They can be the same sex or opposite sex. About two-thirds of all twins are fraternal.

People differ from one another because of the complex interaction between their genetic endowment and their environment. Effects of genes and environments cannot be separated for individuals, but they can be separated at the population level through twin studies. Twins are the same age as each other, and in the twins-reared-together design, they are raised in the same home. Heritability is implied if identical twins (who share all of their genes) are more similar to each other than fraternal twins (who share half of their genes) for the trait under study. Other less common types of twin studies include the twins-reared-apart design, which focuses on twins who were adopted into separate homes when they were infants. These twins do not share their environments so genetic influences are thought to account for their similarities. A more experimental approach is the co-twin control design; one twin receives treatment while the other twin is studied as the control. For example, one twin may attend an after-school program to enhance gymnastic ability and the other will not. Learning effects are examined by comparing the twins' gymnastic abilities before and after the program.

Heritability also can change at different points in the lifespan as genes turn on and off and environmental conditions change. Behavior that is heritable is modifiable by environmental conditions to a great degree. It is important to emphasize that genetic influences are not deterministic but rather increase the probability of the behavior in some environments. Early brain development, for example, follows a genetic program with many opportunities for environmental modification. Appropriate prenatal nutrition is needed for proper dentition, and visual experience is needed for proper sight.

Arnold Gesell was one of the first to use the twin method to study early development. He noticed that identical twins were very similar both physically and behaviorally and used the identical co-twin control method to examine the effects of training on physical development. He studied a pair of twins, neither of whom could climb stairs when they were forty-six weeks of age. One twin was given daily practice and encouragement to climb stairs, while the co-twin had no stairs in his environment. After six weeks of practice, the trained twin could climb the stairs and the co-twin could not. One week later, however, the co-twin could also climb the stairs. Replicating this result in several similar studies, Gesell demonstrated that physical training can cause physical skills to appear sooner but that identical co-twins who were trained later performed the same after a relatively shorter period of training. Gesell later became interested in individual differences and the individual's role in creating his or her own environment. At the beginning of the twenty-first century, this dynamic view of person-environment relationships was being studied with newer sophisticated statistical techniques.

Contemporary twin studies have underscored the ways in which the environment influences human behavior. Studies show that the majority of environmental influences on behavior act to make siblings different from each other. This does not mean, however, that global family variables, such as parenting style, are unimportant for the development of children's behavior. Common factors, such as parenting style, can affect individuals differently and thus may contribute to individual differences. The impact of Three generations of identical female Russian twins. There is some evidence that identical twins are more likely to be dressed alike; there is no evidence, however, that this increased similarity is linked to the types of behaviors that psychologists typically study, such as mental abilities or psychopathology. environmental factors on behavior and development is specific to each child, depending on individual characteristics, such as personality. Thus, parenting is influenced by child characteristics as well as parental characteristics.

Using simultaneous equations model fitting, the classic twin design has been expanded to the multivariate case to examine whether or not the same genetic and environmental factors influence two or more behaviors. This approach is useful for studying etiology, in which a researcher investigates why two behaviors—such as depression and anxiety—are likely to occur together. Using the same example, results from twin studies in childhood (conducted by Anita Thapar and Peter McGuffin) and adulthood (conducted by Ken S. Kendler and colleagues) suggest that a shared genetic factor primarily accounts for the co-occurrence of depression and anxiety. In addition, specific measures of genes (e.g., variations of the dopamine receptor gene) and environments (e.g., socioeconomic status) can be incorporated into the model to determine their individual effect. And assumptions of the twin method can be systematically tested.

There are two main assumptions of the twin design. The first is that twins are representative of the general population. Are twins and single-born children comparable? Because obstetrical complications and congenital anomalies are more common in twins, behaviors that are confounded with these complications are more common in twins. These differences might be important for some characteristics. In fact, twins are overrepresented in cerebral palsy and cognitive delays. On the other hand, twins are comparable on temperament and personality measures, and the proportion of twins in psychiatric clinics is no greater than the proportion for the population as a whole.

The second main assumption of the twins-reared-together design is equality of environments. Are identical and fraternal twins equally influenced by environments that are important for the behavior under study? If this assumption is violated, then the increased similarity of identical twins over fraternal twins may be partially due to environmental, rather than genetic, factors. For example, there are greater discrepancies in birthweight between identical twins than fraternal twins. Also, high maternal age influences fraternal twinning rates. Maternal age can affect parenting style and congenital anomalies. Some fraternal twin parents conceive twins because they used fertility treatments. Thus, it is important that investigators control for these differences when studying related factors. When environmental similarities are found between identical twins, it seems to be the result of (rather than the cause of) behavioral similarity. This finding suggests that environments are not independent of genetic characteristics.

All research designs have assumptions. It is important that investigators are aware of these assumptions and how they limit the conclusions that can be drawn from the study results. One way to test assumptions is to compare the findings of multiple studies using different methodologies. The results of twin studies can be verified by comparing them to findings from family and adoption studies, for example.

Twin designs are embedded in the context of the larger behavior genetic research paradigm. Behavior geneticists study the genetic influences on individual differences in behavior. The behavior genetic paradigm begins with specifying the behavior of interest. Whether or not biological relatives are more likely to also express the behavior is explored next. If so, heritability can be estimated from adoption and twin studies. Relationships with the brain can then be identified. If brain function is related to the behavior and they share genetic influences, this suggests a specific pathway from gene function to behavior. Also, the molecular genetic evidence can be explored. What particular genetic variations are associated with the behavior? Animal models can then be designed to elucidate various components of the system. Investigators are working at all of these levels of the paradigm, and results at one level inform research at another level. Twin studies and other behavior genetic designs are powerful approaches for studying development.

Gesell, Arnold, and Helen Thompson. "Twins T and C from Infancy to Adolescence: A Biogenetic Study of Individual Differences by the Method of Co-twin Control." Genetic Psychology Monographs 24, no. 1 (1941):3-122.

Rutter, Michael, and Jane Redshaw. "Growing Up as a Twin: Twin-Singleton Differences in Psychological Development." Journal of Child Psychology and Psychiatry and Allied Disciplines 32 (1991):885-895.

Thapar, Anita, and Peter McGuffin. "Anxiety and Depressive Symptoms in Childhood: A Genetic Study of Comorbidity." Journal of Child Psychology and Psychiatry 38 (1997):651-656.