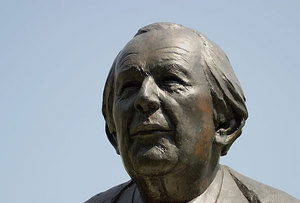 The Three Mountain Task was developed by Jean Piaget and Bärbel Inhelder in the 1940s to study children's ability to coordinate spatial perspectives. In the task, a child faced a display of three model mountains while a researcher placed a doll at different viewpoints of the display. The researcher asked the child to reconstruct the display from the doll's perspective, select from a set of pictures showing the doll's view, and identify a viewpoint for the doll specified by a picture of the display. Some children around age four did not distinguish between their own view and that of the doll, a tendency interpreted by Piaget as evidence of egocentrism. Egocentrism was considered an indication of the preoperational period, a stage that preceded logical thinking. Research since the 1970s has shown young children's perspective-taking ability to be affected by a variety of situational variables.