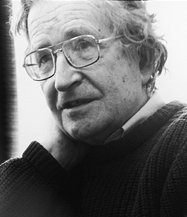 The Language Acquisition Device (LAD) is a hypothetical brain mechanism that Noam Chomsky postulated to explain human acquisition of the syntactic structure of language. This mechanism endows children with the capacity to derive the syntactic structure and rules of their native language rapidly and accurately from the impoverished input provided by adult language users. The device is comprised of a finite set of dimensions along which languages vary, which are set at different levels for different languages on the basis of language exposure. The LAD reflects Chomsky's underlying assumption that many aspects of language are universal (common to all languages and cultures) and constrained by innate core knowledge about language called Universal Grammar. This theoretical account of syntax acquisition contrasts sharply with the views of B. F. Skinner, Jean Piaget, and other cognitive and social-learning theorists who emphasize the role of experience and general knowledge and abilities in language acquisition.