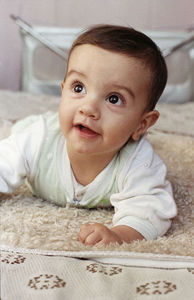 The infant's physical structure and central nervous system undergo dramatic and rapid change during the first two years of life. The infant's weight doubles by five months of age, triples by twelve months of age, and quadruples by the age of twenty-four months. The infant's length does not change as rapidly as its weight, for the infant's length at birth is already 75 percent of what it will be at two years of age. Changes in length and weight are accompanied by transformations in the infant's body proportions. The head grows the fastest and matures the earliest, followed by the rest of the body downward (e.g., the neck, torso, legs). In addition, those parts that are closest to the center of the infant's body (e.g., the trunk) grow faster and mature earlier than do parts that are farther from the center (e.g., the hands). The rapid changes in infants' body proportions affect other domains of development, including perceptual, motor, cognitive, and emotional.

The physical structure of the brain develops rapidly as well. Although a human is born with almost all of the neurons that he or she will ever have, the human brain triples in weight by age three and quadruples in weight by age fourteen. Two primary reasons account for this dramatic change in the brain's weight and size. First, a fatty substance called myelin forms around a part of the neuron, causing substantial growth of the brain and increasing its neural conduction. Second, a part of the neuron called the dendrite branches multiple times, creating numerous synapses or connections with other neurons. It is for these reasons that a brain that weighs 370 grams (13 ounces) at birth will weigh 1,080 grams (38 ounces) by the age of three.

At one time, scientists assumed that the newborn's brain was "hard-wired" and that the environment played little, if any, role in its development. Researchers studying human and nonhuman species have provided overwhelming evidence that experience does, in fact, play a powerful and enduring role in the infant's brain development. The infant's experiences "mold" the brain by preserving active synapses and pruning less active or inactive ones. Interestingly, researchers have found sensitive periods in which the brain is affected by experience more so than at other times.