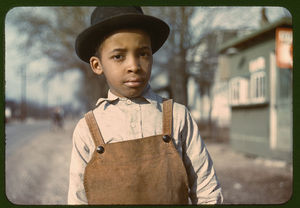 Equally as striking are racial differences in net financial assets (readily liquid sources of wealth that can be used for a family's immediate needs and desires such as savings accounts, stocks, and bonds) within households at similar income levels. In the late 1980s, African Americans in high-income households (over $50,000) possessed only 23 cents of median net financial assets for every dollar of assets held by European Americans. African-American children are further disadvantaged because they are more likely to live in poor, isolated urban ghettos than European Americans of similar economic status. On average, these communities have fewer social, educational, and occupational resources that enhance children's development (e.g., high quality child care), and in many cases are plagued by high rates of crime and violence related to gang- and drug-related activities. Even when African Americans escape poverty at the family level, they have a 50 percent chance of encountering it in their neighborhoods. The social, educational, and economic resources of neighborhoods can influence children in a multitude of developmental areas. For example, children who grow up in affluent neighborhoods or neighborhoods with a higher percentage of affluent families have higher cognitive functioning, complete more years of school, and have lower school dropout rates than children from economically similar families who grow up in poor neighborhoods or neighborhoods with proportionately fewer affluent families.

Religion has been theorized to be an adaptive coping mechanism that has enabled African Americans to transcend the limitations and harshness of their social realities and to give meaning and direction to their individual and collective existence. During the 1980s, nearly 70 percent of African Americans reported themselves to be members of a church. Churches provide informal support (e.g., friendship, companionship, advice and comfort, help during illness, financial assistance), formal services (e.g., meals on wheels, transportation, group outings and vacations, ministerial counseling), and moral guidance. Religiosity and church membership enhance self-esteem partly as a consequence of the perception that one is held in high regard by other believers and by an omnipotent divine other who makes his/her presence felt in one's life. Religiosity also buffers the negative psychological effects of stress. Having a mother who seeks spiritual support is one of several factors that distinguishes African-American children who are stress resilient from those who are stress impaired.

African Americans are more likely to reside in extended family households than are European Americans. Extended families are close kin relations within and across generations whose members are intensely involved in the reciprocal exchange of goods, services, and ongoing emotional support. As such, they are problem-solving and stress-coping systems. Typically, involvement with extended family is beneficial to young children and adolescents, partly because of increased support, monitoring, and supervision. African-American adolescents whose single parent is involved in extended family activities report fewer problem behaviors.

African-American and Latino adolescent mothers who report higher levels of grandmother support have fewer psychological problems, more positive interactions with their babies, and higher levels of educational attainment. Nevertheless, the impact of grandmother involvement, especially when mother and grandmother are co-residing and/or coparenting, is not uniformly positive. Researchers do not yet have a good understanding of what circumstances render different types of support from grandmothers helpful versus detrimental or inert. In general, though, parents' support networks reduce emotional strain; lessen the tendency toward punitive, coercive, and inconsistent parenting; and in turn, foster socioemotional development in children.

Urban African-American and European-American parents modify their strategies for managing their children's lives and behavior in accordance with the risks and opportunities afforded by neighborhood conditions (e.g., resources, level of crime). This responsiveness has positive effects on children's development. For example, parenting characterized by a combination of restrictiveness, extensive rule setting, and warmth appears to be especially beneficial to the cognitive and socioemotional functioning of African-American children living in high-risk, crime-laden neighborhoods. This parenting style shields children from noxious elements and bestows them with a positive self-concept that helps deflect negative influences in their extrafamilial environment.

African Americans are more likely to view physical discipline short of abuse as an appropriate display of positive parenting than are European Americans. African-American mothers consistently report higher frequencies of spanking than European-American mothers, even when socioeconomic status is taken into account (McLoyd, Cauce, Takeuchi, and Wilson 2000). Cultural variation in the acceptability, meaning, and parental attributes associated with spanking also may be the reason that parents' use of physical discipline predicts higher levels of behavior problems among European-American children, but does not among African-American children. That is, because of its commonplaceness in African-American culture, spanking may coexist with high levels of warmth to a greater extent in African-American households than in European-American households. African-American parents also may be less likely to administer spanking in an impulsive or excessively harsh, punitive manner. There is some preliminary support for these claims, but more rigorous evaluation of them is needed. In any case, existing research underscores how critically important it is that parental strictness not be equated with punitiveness and a cold emotional style. The latter qualities are risk factors for behavioral problems in children as indicated by evidence that mothers of stress-resilient African-American children (those exposed to high stress burdens, but who show no clinically significant behavior problems) are less rejecting and aggressive than mothers of stress-impaired African-American children (those exposed to high stress burdens who show clinically significant behavior problems).

Tatum, Beverly Daniel. Why Are All the Black Kids Sitting Together in the Cafeteria? And Other Conversations About Race. New York: Basic Books, 1997.

U.S. Department of Health and Human Services. Trends in the Well-Being of America's Children and Youth. Washington, DC: Child Trends, 1999.