Possible Negative Effects Of Computer Use 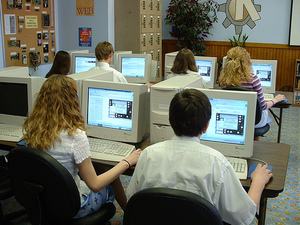 One of the most compelling arguments made against the use of computers by children is the risk of repetitive motion injury such as carpal tunnel syndrome. This problem may be greater for children than for adults because their musculature and skeletal systems are not fully formed and may be at greater risk for injury. Children's risk of suffering repetitive motion injuries may be further increased because they tend to use computers that are sized for adults, placed on adult-sized furniture, and positioned for an adult user.

Another possible risk of using computers is eye-strain, which may include dryness due to not blinking enough, headaches, and blurry vision. To reduce this risk, it is important to limit the time spent staring at the screen; take frequent breaks, making sure to focus the eyes on distant objects; and blink frequently. It is also important to position the monitor sixteen to twenty-seven inches away and in a way that ensures that the user views it at a slightly downward angle.

Following some highly publicized events in Japan, it has been suggested that there may be a risk of seizure for children playing video games containing bright flashing lights. Many video games include An elementary school student uses a computer in the school library while another students looks on. The ease and facility with which children use computers comes from the ability children have for assimilating tools in their environment for their personal use. a warning to this effect in their documentation. Fortunately, very few children are susceptible to this condition. For those who are, however, this is potentially a very serious situation.

There also has been some attention given to the possible risk of exposure to electromagnetic radiation from the computer's monitor. Some people note that such radiation exposure may be greatest at the back and sides of the monitor, which may be important because computer labs in schools are often arranged in such a way as to put a child's head next to or directly in front of another computer's monitor. Once again there is insufficient proof that this is a real threat. According to the Occupational Safety and Health Administration, the risk of exposure to electromagnetic radiation is very low when the user is positioned correctly in relationship to the monitor.

Some people caution that there may be a link between computer use and obesity in children. This opinion is often based on studies that find links between television viewing, reduced activity, and childhood obesity. It is not clear, however, that sedentary activities cause obesity. It may be that children who are sedentary and therefore at a greater risk of obesity may choose sedentary activities such as television viewing and computer use over more physical activities.

Some studies show that there is a correlation between a child's preference for violent video games and measures of aggression. This is an area that will receive more attention as realism and violence levels in video games continue to increase.